Fear of Finishing and the Constant Rewriting Gig Why do beginning writers or any writers get one rejection, and then rewrite? Or go on to another work, abandoning weeks, months, or years of work?

According to Louise deSalvo, writing in her excellent Writingalife’s Blog:

“Fear of failure? Failure of nerves? I don’t think it’s either, and I think it’s easy for people who haven’t faced a situation like this to pathologize something that’s simply a normal part of the process.

In this publishing climate, it might be a long and bumpy ride before this particular work finds a publisher. That this writer recommends it might not assure that this agent will take it on, that a press will take it on. Still, that doesn’t mean that the answer is to hold it close, rewrite it, hoping that the next rewrite will be the one about which you won’t have anxiety.

I can’t believe I found this. I re-read Kennedy Frazer’s review of Virginia Woolf and Louise deSalvo’s biography about childhood sexual abuse and its impact on Woolf. I wrote a paper on that in college, and got slammed by the professors. Basically, they said I could not write it. It was blasphemous.

I have the paper with their comments.

Re-reading the essay caused me to order deSalvo’s book. I sometimes write about sexual abuse, rape, violence, incest, and addictions. I am finally giving myself permission to write. What I could not understand was my tendency to write a book, get one rejection, and then rewrite the book (or story or article).

Now I finally have the answer. I was trying to “retreat” to deal with the anxiety of letting something go. And, because of the nature of the work, to expose myself to the same rejection and denial the original assaults caused in those in whom I tried to confide, seek help.

The truth is that one will get rejections, and then an acceptance of the very same work. Do not pull anything out and rewrite it if you’ve done the very best you can. You have too much work to rewrite it. Your job is to finish it.

There’s no doubt that for many of us, writing structures our world, and when we’re holding a huge revision in our heads, it pushes out the hard stuff, the stuff that causes anxiety, the stuff that we write to exorcise. I’m one of those writers. Writing structures my world, and I’m not ashamed to say so. Writing also structures the life of John Banville (check out his book, The Sea, one of the greatest contemporary novels, to my mind). In an interview I heard with him on NPR, about his recent novel, The Infinities, he proclaimed, on national radio, that he always has to be writing, that he can’t stop. He put it far more elegantly than me, because his language is a revelation – you’ll encounter delicious new words in his books that will prove to you how immense and vast a resource the English language is for us.

Maybe you indicated what you know about the end of a project — that the tendency to hang on to it is huge, and that, when we’re almost finished, we start hating the work, or think it’s boring (it is, to us, because we’ve been writing it for ages, but it won’t be to other people), or think it’s awful, and you gently remind them that it might be time to let go.

Learn about how long it takes to write a book, see it published, so we don’t have false expectations about, say, finding an agent in one or two tries.

DeSalvo also writes an entire post about “walking to work” as a writer – walking for hours and hours, as Virginia Woolf did – and Woolf wrote only three hours a day and then walked for miles – or as another writer does to feel he is going to work. I started walking for the dogs, and for severe mourning and depression, and then it became wonderful. It felt good. So I kept doing it and expanded it. Walking saves my life.

… But many writers I know stop or bog down just at the point when things are about to become very, very interesting. For Matisse, remember that that didn’t happen until the seventh year of his work, though you could see movement in that direction earlier.

How long are we willing to wait to get our most radical work? Are we stopping short of when our work begins to sing its true song? I suspect that many of us do, and it’s too bad. I’m suggesting that we don’t, that we shove on until our work starts to surprise us, even startle us with what it’s becoming.

… What I don’t have in my life, what I don’t do: meaningless telephone conversations; lunches with people I don’t love; meetings that don’t have a clear-cut agenda; face book, twitter, net surfing; shopping for the sake of shopping (I buy what I absolutely need, mostly online); boozy nights out on the town that would rob me of my next day’s work; friendships with people who take and don’t give; television watching (except for planned film watching); virtually all parties (I don’t like parties; I like small, intimate gatherings); writers’ readings (I can’t process writing when it’s read; I have to see it). There’s more, but you get the idea. The guiding principle behind this is self-protection: I can’t be rushed; I can’t be stressed; I can’t be overworked. If I am, I can’t do my best teaching, my best writing. So I spend some time in a kind of cost/benefit analysis for most of what I can/what I’m asked to do. What will it cost me? What will I gain from it? If the cost outweighs the gain, I don’t do it.

DeSalvo also blogs about writing about trauma in third person:

I often write the material in the third person on the first round – using “she,” not “I.”  Sometimes, as in Vertigo, when I relate a childhood depression, and when I describe an instance of abuse, I’ve chosen to keep the third person in the published text. But sometimes I don’t. After some time has passed, I take the third person recounting, and recast it as first person. It seems, for me, that going at the material using third person the first time around provides me with the kind of distance I need to get at the material. It also provides a kind of artistic distance and reminds me that I’m writing, not a confessional, but a work of art, and so, keeps me from reliving. Retell not relive seems to work for me if I write in third person at the beginning of the process. (One caveat: if using third person stirred feelings of depersonalization in me – one effect of trauma – I’d back off.

… (According to some tests I’ve taken, I … manifest certain ADD traits like plunging into projects, moving from one thing to another, having difficulty completing tasks. Even though I’ve published a score of books, getting to the end of a book is very hard for me.)

… What I learned as I did research on creativity for my book Writing as a Way of Healing is that travel seems to engender creative breakthroughs and, according to Howard Gardner, indeed might even be necessary for the creative mind. And if not travel, exploration nearer to home through walks in unfamiliar neighborhoods. Gardner’s book, Creating Minds (NY: Basic Books, 1993) lists travel as one of the defining features of the creative personality — travel, focusing on one domain, organizing one’s life to do the work, giving something up, among other things. 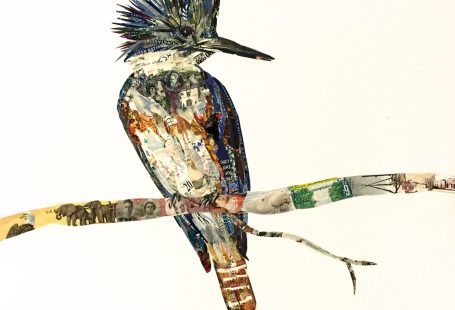